This collection of letters and documents chronicles recent events in the village of Hanweir (southwest of Thraben in the Viddens Perish, Gavony).

Note from the mayor

Farmer Roller, You must cease the rumors about my daughter and that dim-witted thatcher! I'd geist-lock Lorelai before I'll let her marry a buffoon like Pitre. 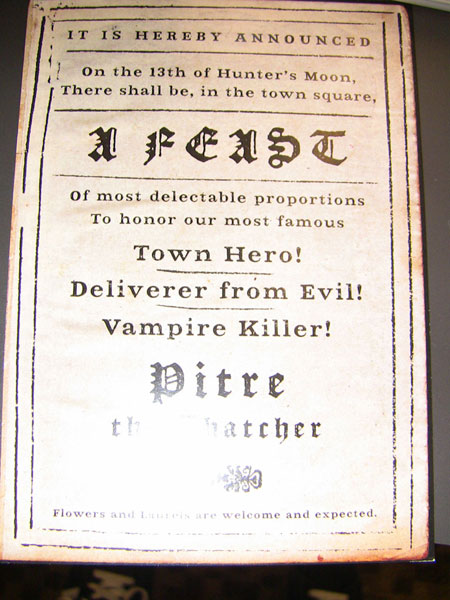 IT IS HEREBY ANNOUNCED

On the 13th of Hunter's Moon There shall be, in the town square A FEAST Of most delectable proportions To honor our most famous Town Hero!

Flowers and Laurels are welcome and expected.

You will not understand why I am leaving, which is why I have left in the night, this letter being my only explanation.

The awful truth is that I have not earned the town's accolades. The vampire I killed was just a whelp who I caught unawares while he was feeding on the chickens.

He didn't even see me, and that's how I was able to take his head off with my spade. I do not think he ever knew what happened!

When I took the head to the mayor, I was set on telling him the truth. Once he saw the fangs poking out from the horrid thing's mouth, he started a big fuss, and before I knew it, he dragged me out into the square and announced my supposed victory to all.

I've been caught up in all this mess, and living with the truth has driven me to near madness. I'm going to Erdwald in Nephalia to find a real vampire, and kill it. I cannot live with myself, nor marry you, until I have fulfilled the destiny that has been attributed to me.

Dearest Lorelei, It has been a harrowing journey, to be sure. Erdwald is so much bigger than Hanweir! I fear my life has ill prepared me for such a place as this. I've been relieved of my meager kit by a gang of footpads that greeted me at the town's gates, saying they were "inspectors." They were out of sight before I realized they had fled with all I brought, save the clothes on my back. Fear not my love! For adversity is the soil in which opportunity sprouts. I have taken in with the church, and they have greeted me with open arms! A priest has given me food and shelter, and only asks me to perform menial tasks in the upkeep of the church yards. It is a job I am all too well suited for! Yet Avacyn has a plan, even for me! My priest has also been instructing me in the art of vampire hunting. I know it sounds dangerous, and it is, but you can be assured that when I return, you can hold your head up high as we march through the town in our wedding procession! Yours, Pitre 14th of Hunter's Moon, Ava. 719

Day of days! My training is complete, and now I am on the trail of that most unholy of abominations — Vampire. The one I hunt is clever, there is no doubt. But I have faith on my side! Faith in Avacyn, faith in my training, and above all, faith in the truth that the blessed sleep is nothing compared to living a life with you.

LETTER TO THE ABBEY AT LAMBHOLT

I know that it was necessary, I know Pitre would want just this. Cut off the head - the only way to prevent the conversion, and there was no way to verify whether he was bitten or not. But his blood is now forever on my hands, and only Avacyn gives me purification. For this reason, and for many others, I pray you take me in your humble order. For me, there is no more sense to stay here in Gavony.

With faith in Avacyn, 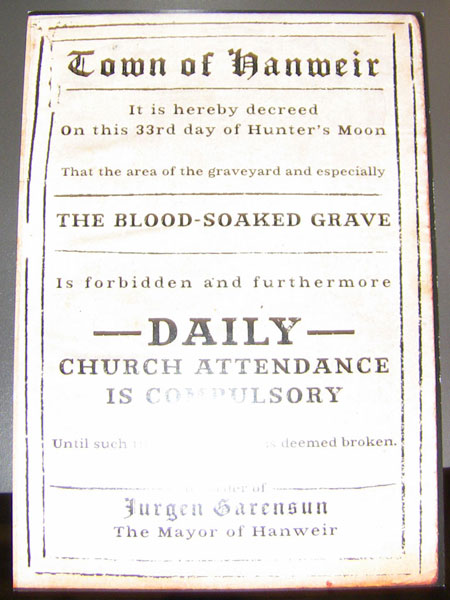 This book was once a place of solace for me. A refuge. Now that its prayers have somehow faded from its pages, I cannot help but think that it is a sign that Avacyn has forsaken me.

My father has sent me on a mission for yet another of the weapons. I haven't the heart to tell him that each of these quests has proven to be near fatal. I cannot let him down is it heresy to say that I fear his disappointment more than Avacyn's?

He has given me the name of a village; Hanwier. After a long journey, and a short battle with a band of brigands, I arrived this night to the shuttering of windows and closing of doors. Whether this place is cursed as its inhabitants believe remains to be seen. The curse of mistrust is flourishing however.

So this book, once a place I went to for enlightenment, now becomes a place that will hopefully enlighten others. For I have little doubt that this is my final sortie. If I do not return, I pray to Avacyn that this book finds its way home.

Father, if you are reading this, I am sorry for failing you.

A most enlightening day, indeed.

The town, appearing most deserted, was in fact filled with cowering peasants. I presented my patents to the mayor, a fattened calf named Jurgen. He eyed the scroll and waxed seals nervously, then relented to their obvious authority.

He then proceeded to stammer out the story of a local thatcher who had returned to the village after a journey, bleeding and near death. Once he had reached the chapel, he fell dead at its doorstep.

What came next confirmed my suspicions that this was the man I was sent to find. The mayor led me to the graveyard, where a grave ringed in red dirt resided. This blood-soaked grave could only be the final resting place of the man who had been kissed by the blade I seek.

To the sheer horror of the humble townsfolk, I ordered his body exhumed. There was much protest, but the power of the church prevailed and the digging commenced. The work proceeded until dusk, when the worker's shovels at last clanked against wood.

The simple casket was saturated with blood, its timbers nearly falling apart. Once opened, a bloody tide poured forth, to the screams and gasps of the gathered locals. Floating within, body of Pitre the Thatcher rested.

Just as Father had told, his wound continued to pump forth blood. It is no wonder the people of this town feel they are cursed. After sketching the message that had been carved into his flesh, I had his remains purified by fire. May Avacyn show him the mercy that this life did not.

Community content is available under CC-BY-SA unless otherwise noted.
Advertisement